Traditionally, triple-negative breast cancer (TNBC) has been classified as an aggressive malignancy defined by what it is lacking—namely, malignant cells which express the estrogen receptor, progesterone receptor, or human epidermal growth factor receptor 2 (HER2). In addition, the median overall survival (OS) for patients with metastatic TNBC typically ranges from 8-13 months. These characteristics present significant therapeutic challenges, as patients with TNBC do not benefit from anti-hormonal or HER2-targeting therapies; consequently, for many years, standard treatment for this patient population has consisted of various combinations of cytotoxic chemotherapy. As a result, novel therapies are needed to face these significant clinical challenges.

With the advance of genomic technologies, efforts are ongoing to molecularly classify this genetically heterogeneous malignancy. It is hoped that the added information concerning molecular drivers for this malignancy will yield targetable therapies for these patients.

Currently, the molecular heterogeneity of TNBC is categorized based upon the following criteria: the patient’s germline BRCA1/2 mutation status, the presence of somatic mutations, which could serve as oncogenic drivers for the disease, and the presence of the androgen receptor. [See Table 1] 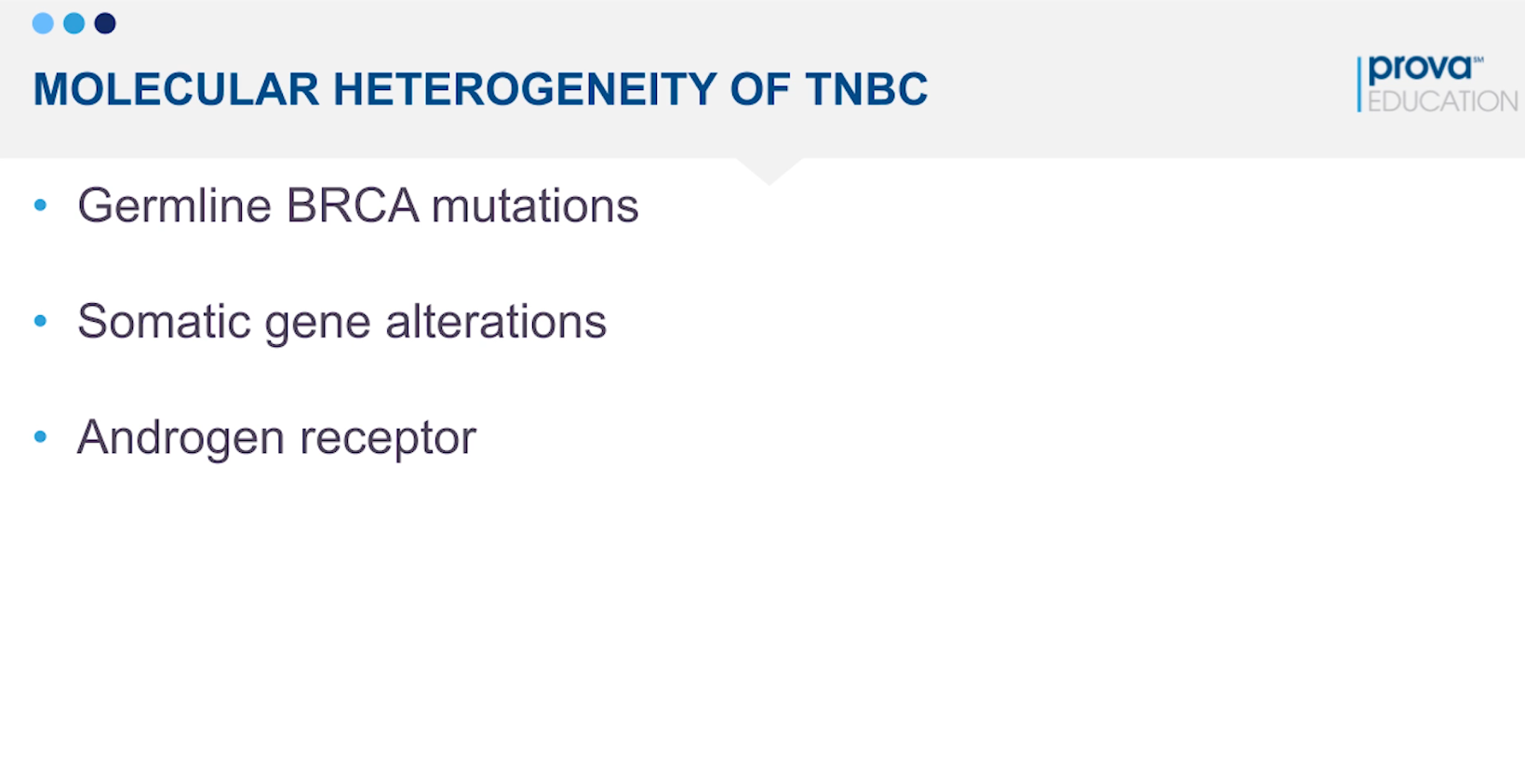 Somatic mutations which may be targetable include those in the PI3K/AKT or PTEN pathways. Clinical investigation in the TNBC setting is ongoing for the AKT inhibitors ipatasertib and capivasertib. In addition, a subset of breast cancer patients have mutations to the neurotrophic tyrosine receptor kinase (NTRK) gene. Although only approximately 1% of patients with breast cancer have a mutation to NTRK, roughly 2/3 of those have TNBC.  [See Table 2] 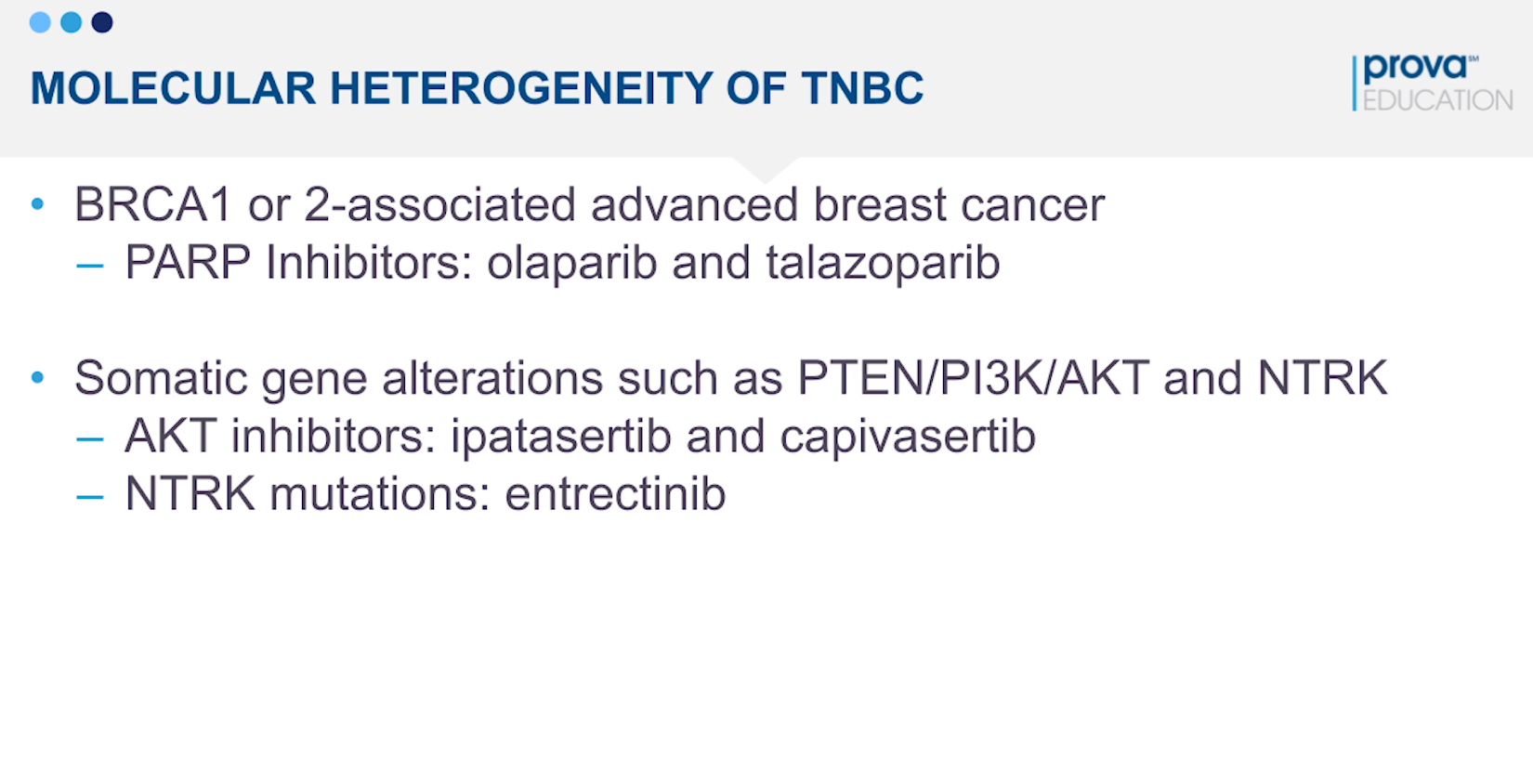 More research needs to be done in order to effectively treat those patients having TNBC that expresses the androgen receptor. Response rates seen for the blockade of this receptor in these patients have frequently been less than 20%.

In January 2018, the FDA granted regular approval to olaparib, the first-in-class PARP inhibitor for the treatment of patients having germline BRCA1/2-mutant, HER2- metastatic breast cancer who received prior chemotherapy (in the adjuvant, neoadjuvant, or metastatic setting). This approval was based on the results obtained in the OlympiAD clinical trial (NCT02000622), a study in which eligible participants received either olaparib or physician’s choice of chemotherapy (capecitabine, vinorelbine, or eribulin).

In October 2018, a second PARP inhibitor, talazoparib, was approved by the FDA for patients having germline BRCA1/2-mutated, HER2‑ locally-advanced or metastatic breast cancer. Patient selection for treatment was contingent upon BRCA1/2-mutation confirmation using the FDA-approved companion diagnostic. The approval letter cited results obtained in the EMBRACA trial (NCT01945775), which compared talazoparib with physician’s choice of chemotherapy (capecitabine, eribulin, gemcitabine, or vinorelbine) in patients with BRCA1/2-mutant, HER2- locally-advanced or metastatic breast cancer. 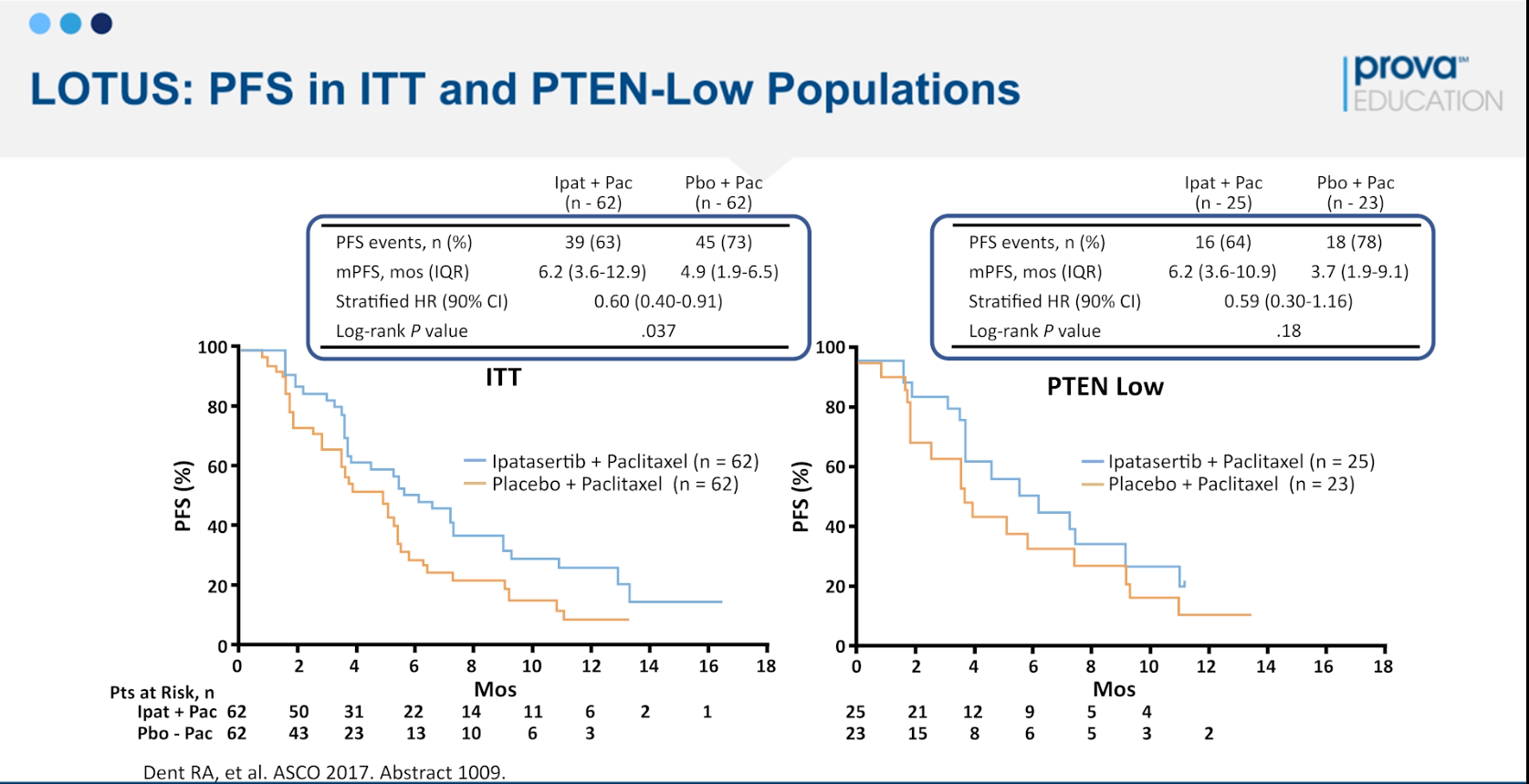 In August 2019, the FDA granted approval for the use of entrectinib in patients having a solid tumor with confirmed NTRK fusions, a rare mutation that occurs in around 0.1% of cases of TNBC.  This approval cited results obtained in the STARTRK-2 (NCT02568267), STARTRK-1 (NCT02097810), and ALKA-372-001 (NCT02097810) trials.  This approval continued the recent paradigm of tissue-agnostic approvals based on common biomarkers seen across a variety of tumor types.  Prior examples of this include the May 2017 approval for pembrolizumab in patients with microsatellite instability-high or mismatch repair-deficient malignancies and the November 2018 approval of larotrectinib for NTRK fusion+ solid tumors lacking a known acquired resistance mutation.

TNBC is considered to be one of the most immunogenic breast cancer subtypes. Clinical studies have shown that the enhanced presence of tumor-infiltrating immune cells (TIICs) was associated with improved clinical benefit in these patients.2 One hallmark for cancer progression is the evasion of malignant cells via immunosuppression in the tumor microenvironment (TME). Considerable research has focused on the role of checkpoint inhibitors in TME immunosuppression, especially the blockade of the programmed cell death-1 (PD-1) receptor/programmed death-ligand 1 (PD-L1) pathway.

In the phase 1b KEYNOTE-173 trial, patients with locally-advanced TNBC received the anti-PD-1 antibody pembrolizumab with a variety of different chemotherapy combinations, including either taxane alone followed by anthracycline or taxane-platinum followed by anthracycline-based therapy.3 The pathologic complete response (pCR) rate in the study was around 60%, while the 12-month event-free survival (EFS) rates were 100% for those achieving pCR and 88% for those who did not. The investigators concluded that as a neoadjuvant therapy, pembrolizumab plus chemotherapy yielded promising antitumor activity with a manageable toxicity profile, which supported the ongoing KEYNOTE-522 trial. 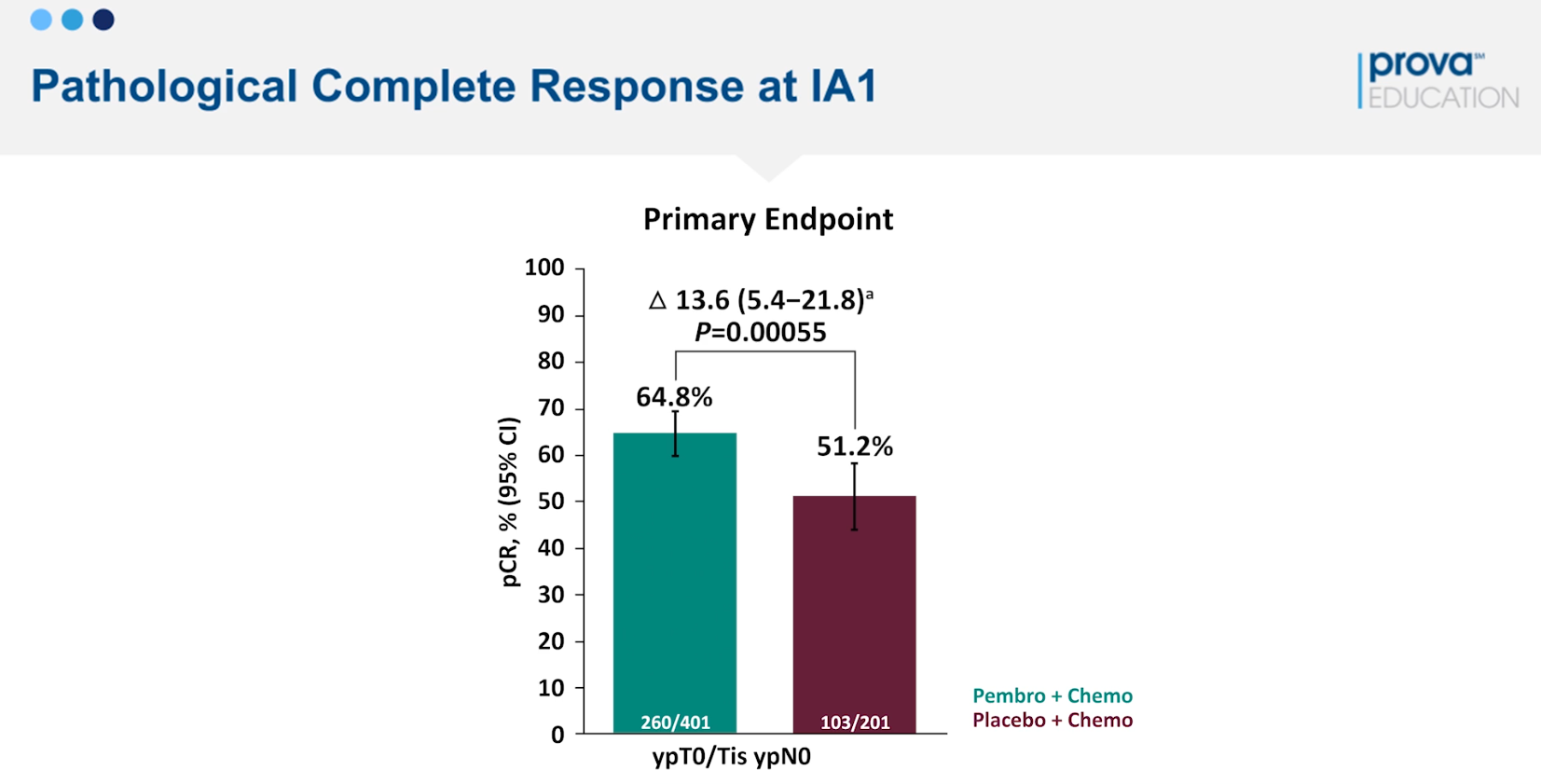 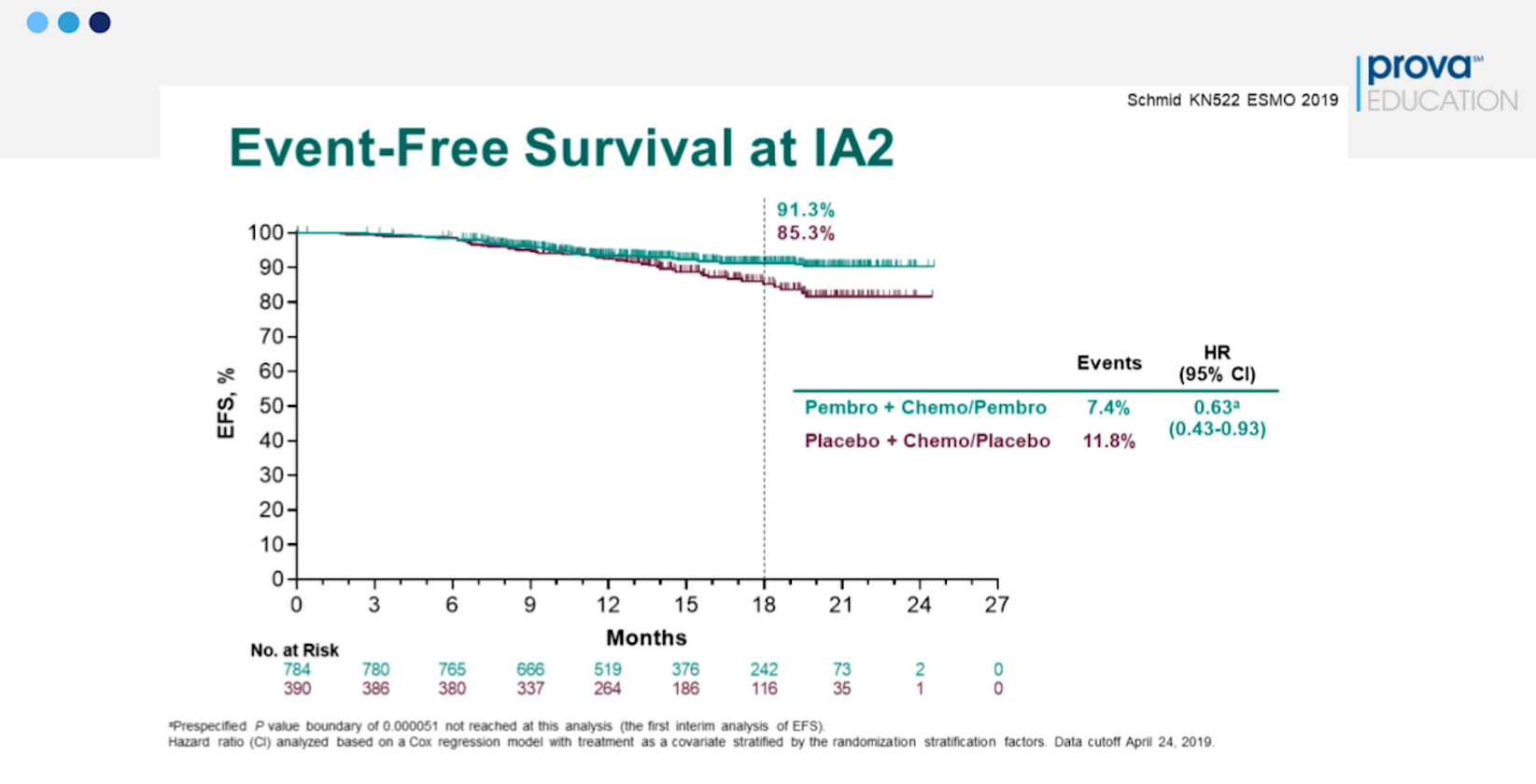 The Phase 3 IMpassion130 clinical trial evaluated the use of nanoparticle albumin-bound paclitaxel (nab-paclitaxel) in combination with the anti-PD-L1 antibody atezolizumab or placebo in treatment-naïve patients with TNBC.5 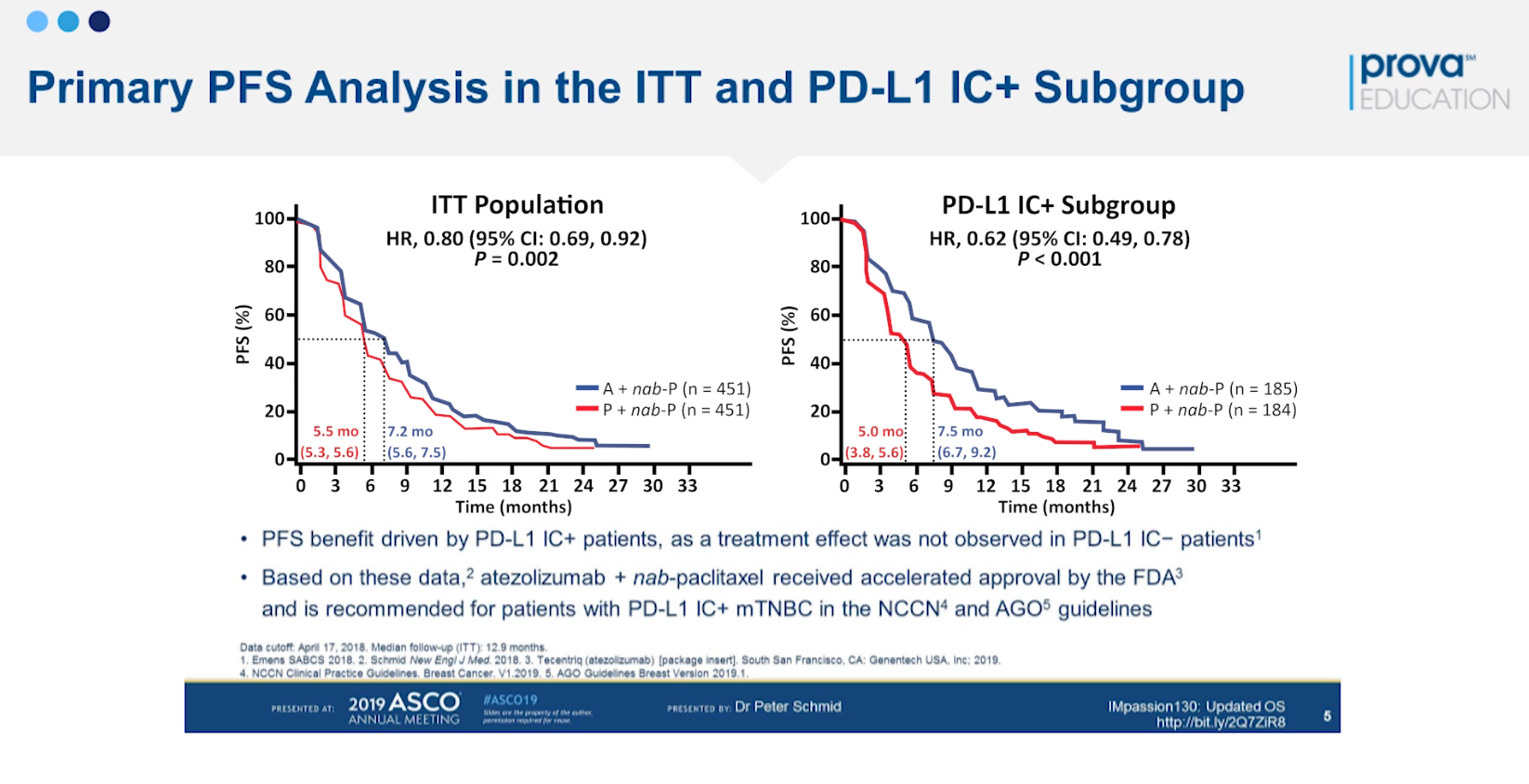 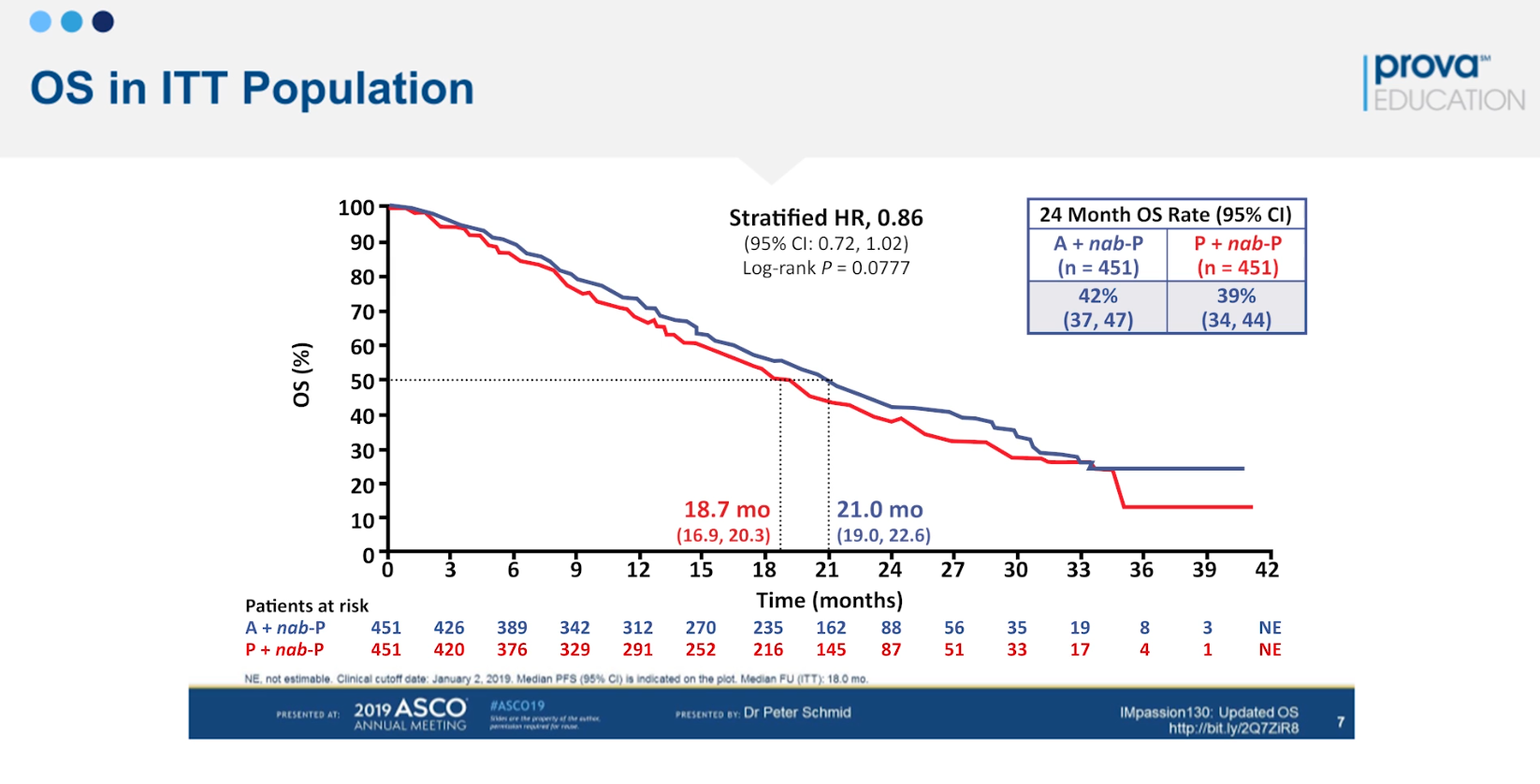 This study revealed that the assay used to determine PD-L1-positivity is rather important. If a patient is PD-L1+ by the Ventana SP142 assay, then they were also likely to be positive by one of the other PD-L1 assays (e.g., the Dako 22C3 or the Ventana SP263 ); however, it was not readily apparent if the same clinical benefit would be present if the tumor was PD-L1- by SP142 yet positive by one of the other assays. Given these data, it is thought that the SP142 antibody was the one which was most likely to provide the greatest benefit with atezolizumab in combination with nab-paclitaxel, and thus should be the assay used for testing the TIICs in these patients prior to therapy initiation.

The only clinical data which support the use of checkpoint inhibitor-based immunotherapy as a standard of care in metastatic TNBC comes from the IMpassion130 trial. The PFS data showed a clear trend for benefit with atezolizumab in both the ITT and PD-L1+ populations; however, statistical significance was only noted in those with PDL1+ TIICs. Highly statistically significant improvement in OS, of approximately 7 months, was only noted in the PD-L1+ population. Although atezolizumab is generally well-tolerated, serious adverse events do often occur with its administration; consequently, if a patient’s TIICs were clearly PD-L1-, it may not be advisable for the patient to receive atezolizumab. As an alternative, one might search for germline BRCA1/2 mutations, and if present, offer FDA-approved PARP inhibitor therapy. In the absence of such anomalies, one might consider doing next-generation sequencing to test for rarer mutations, microsatellite instability, or mismatch repair deficiency. Such analyses could yield mutations which are amenable to targetable therapies. If targetable mutations are not readily apparent, a clinician may consider finding appropriate clinical trials for their patients, or perhaps, treat with standard chemotherapy.

Could immunotherapy-based combination therapy approaches change the standard of care for patients with triple-negative breast cancer?