The clinical picture for minority patients is also complicated by the fact that optimization of their care is difficult because these populations are underrepresented in clinical trials, resulting in limited evidence on which clinicians can base decisions about treatment and follow-up.4 Barriers to clinical trial participation are multiple, including differential response to first-line treatments, socioeconomic issues, and cultural influences.1 This article summarizes data on the epidemiology of MS in African Americans and Hispanic Americans, disabilities associated with the disease in these two populations, the reasons for ethnic disparities in treatment of MS, and results of recent randomized clinical trials targeting specific ethnicities.

Epidemiology of MS in African American and Hispanic Populations

Two large multiethnic cohorts indicate that in recent years, the demographics of MS in the United States have changed drastically, in tandem with overall nationwide population shifts influenced by factors such as immigration.6-8 Incidence of MS may be increased in African Americans and up to 47% higher in African American women compared to non-Hispanic white women.1

Higher rates of disability are seen in both African Americans and Hispanics than in non-Hispanic whites with MS, and there are suggestions that African Americans may reach step 6 on the Expanded Disability Status Scale (EDSS) up to 6 to 10 years earlier than their white counterparts.1 Potential challenges in treatment and care of MS in Hispanic Americans include population changes, delayed diagnosis, immigration, acculturation, and lack of culturally relevant MS materials and programs.9 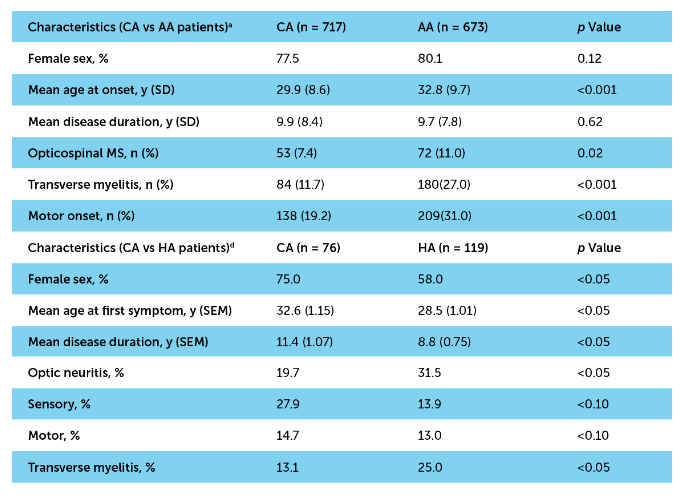 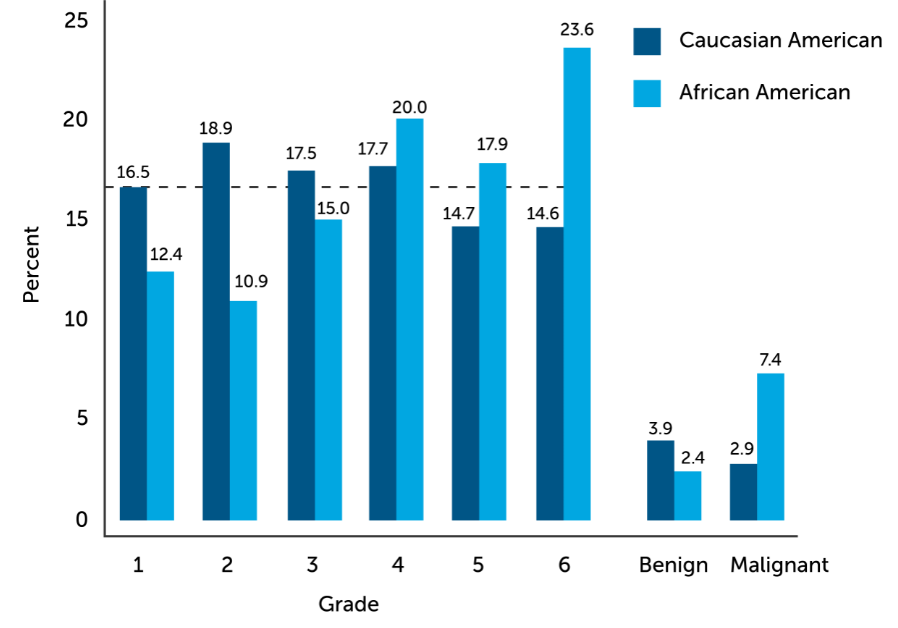 A longitudinal study that tracked 15 African Americans and 115 non-Hispanic whites with MS using optical coherence tomography (OCT) found that, regardless of treatment status, African Americans tended to have increased rates of degeneration of retinal tissue and of brain and brain structure atrophy compared with their white counterparts.10 Gray matter, white matter, and nuclear thalamic atrophy rates were approximately twice as fast in the African Americans.10 These results underscore the need for future research in African Americans to identify individual differences in treatment responses in MS.

While the incidence of MS is lower in Hispanic Americans than in African Americans, their disease patterns also differ from that seen in non-Hispanic whites. Research is lacking in this population, but in a single-institution study based on medical chart review, initiation of symptoms occurred at a median age of 28.4 years in Hispanics versus 32.5 years in non-Hispanic whites.9 Compared with whites, Hispanic Americans were more likely to have a relapsing-remitting form of MS with presenting symptoms of optic neuritis and transverse myelitis and lower levels of vitamin D.9 Optic neuritis was also more common in Hispanics with MS from western parts of the United States than in non-Hispanic whites.6,11,12

Little information exists about imaging for MS in the Hispanic population. In one study done of Hispanics with MS in California, 25% of patients with adult-onset disease had complete transverse myelitis at presentation compared with 13% of non-Hispanic whites.12 In another study, cervical spinal cord lesions were seen on magnetic resonance imaging (MRI) in more than 75% of Hispanic patients with MS, with a median time of diagnosis of 2 years at the time MRI was collected.11

Factors that prevent minority populations from accessing care for MS and receiving adequate treatment include personal risk factors, economic factors, accessibility issues, cultural and religious beliefs, and distrust of the medical system. An analysis of data from the 2006-2013 Medical Expenditure Panel Survey (MEPS) showed that, compared with whites, Hispanic participants were 40% less likely to see an outpatient neurologist (odds ratio [OR] 0.61, confidence interval [CI] 0.54-0.69) and blacks were nearly 30% less likely to see an outpatient neurologist (OR 0.72, CI 0.64-0.81), even after adjusting for other factors that could affect access to care.14

Research shows that Medicaid’s home- and community-based services to support African Americans and Hispanic Americans with MS are underutilized by those populations.15 As a result, these populations are less likely to receive case management, equipment, technology, and home modifications compared to whites, even though programs to provide assistance are available.

Therapeutic Approaches for MS in African Americans and Hispanics

One of the largest gaps that exists in knowledge about therapy for MS is regarding specific ways to make treatment decisions based on an individual’s ethnicity. In part, this stems from a lack of MS clinical trials with minority patient enrollment. However, new data are emerging in this area.

Two interim analyses from ESTEEM, an ongoing, Phase IV, 5-year observational study of the safety and efficacy of delayed-release dimethyl fumarate, were presented at the 2019 meeting of the Consortium of Multiple Sclerosis Centers (CMSC). Both reflect real-world evidence with the drug, one in black or African American patients and one in Hispanics.16,17 These post hoc analyses included patients newly prescribed dimethyl fumarate in routine practice at approximately 380 sites globally. An 82% lower unadjusted absolute risk reduction (ARR) was seen in black or African American patients at 24 months after initiation of dimethyl fumarate than 12 months before.17 Results were similar in the Hispanic patients with 76% lower unadjusted ARR for the same time periods.16

Also presented at the 2019 CMSC meeting was a post hoc analysis of treatment retention and satisfaction in Hispanic and Latino patients from the PREFERMS study. The trial was a 12-month, phase IV, open-label multicenter study of fingolimod versus injectable disease-modifying therapies (DMTs) for relapsing-remitting MS. Although the Hispanic and Latino subgroup was small, the post hoc analysis showed that treatment satisfaction was higher with fingolimod (75%) versus intravenous (IV) DMTs (63.6%) as was retention (91.7% and 50%, respectively).18 In a previous subgroup analysis from PREFERMS, retention was studied in African American patients.19 As in Hispanics, retention was significantly higher for fingolimod than for IV DMTs (80.6% vs 30.4%). The most common treatment switch was from an IV DMT to fingolimod for injection-related reasons.

Presented at ECTRIMS 2018, a subgroup analysis of the efficacy of ocrelizumab versus interferon β-1a from the OPERA I and OPERA II studies showed that treatment benefit on MRI and composite efficacy outcomes in African American patients with relapsing-remitting MS were similar to those in the overall study populations.20

Data from a retrospective analysis presented at ECTRIMs 2018 showed no difference in treatment outcomes between African Americans and whites in the CombiRx study.21 African Americans did, however, have worse disability (P = 0.007), higher total lesion burden (P < 0.0001), and a trend toward lower normalized brain volume (P = 0.055) than their white counterparts. CombiRx was a multicenter, randomized controlled trial of the combined use of interferon β-1a weekly and glatiramer acetate daily versus individual use in relapsing-remitting MS.

To enrich the data on MS in minority populations, diversification of participants in clinical trials is crucial. Registries of multi-institutional studies are also needed to help clinicians better understand these patients. Increasing efforts to educate patients with MS who are members of minority communities is another area for improvement. One such initiative is the MS Minority Research Partnership Engagement Network.22 This group is composed of multiple parties and includes industry partners, advocacy group representatives, physicians, clinicians, researchers, and people living with MS. The Network has produced several toolkits to improve cultural competency, including one for people living with MS to help them understand clinical research and another for researchers to ensure that the way they address minority populations is culturally appropriate. 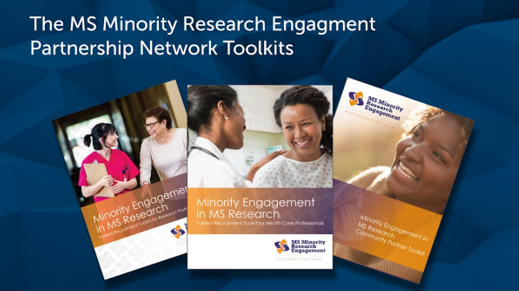 Progress is being made in improving care for African American and Hispanic patients with MS, and while the understanding of these populations has improved significantly, gaps in knowledge remain. More research is needed about the impact of the disease in minority populations, how to make individualized treatment decisions based on an individual’s ethnicity, and on disparities in response to therapy. For their part, clinicians should seek resources for African American and Hispanic American patients with MS that will encourage these individuals to trust the healthcare system and increase their adherence so that they will have better outcomes throughout their disease course.

Gain an understanding of the barriers of optimized care in African American and Hispanic populations with multiple sclerosis.