Thanks to recent advancements, strategies for treating ulcerative colitis have evolved from simply controlling symptoms to treating patients in order to achieve objective measures of inflammation control, sustained remission, and to prevent progression of the disease. Biological therapies and small molecule disease-modifying antirheumatic drugs (DMARDs) have played a part in this shift, but what real-world data are there to support the use of these therapies earlier in the treatment paradigm?

In March of 2019, the American College of Gastroenterology (ACG) released a long-awaited update to the 2010 guidelines for ulcerative colitis.1 Included in these guidelines was new thinking about ulcerative colitis and discussion of the many new therapies approved by the FDA since 2010. One significant change was the definition of activity of disease, separating it from severity of disease. Activity of disease refers to how inflamed or sick the patient is at the time of evaluation; severity refers to prognosis. Separating them helps to clarify treatment decisions so they are based not only on short-term outcomes, but also on longer-term expectations. Another advance was the introduction of a new activity index including not only the usual markers of clinical activity but also the symptom of urgency, which can be quite disabling and is the result of an inflamed rectum. Also added to the activity index were measures of endoscopic activity and inflammation based on fecal calprotectin.

One of the major changes in ACG 2019 was the adoption of a management goal focused on healing of the bowel mucosa. As described, patients with a healed bowel are less likely to need steroids, have a relapse within the next year, be hospitalized, and require surgery for their colitis.

A key point is that half of patients in symptomatic remission for their colitis still have active inflammation. The discordance between feeling well but still having active inflammation offers an explanation as to why some patients who appear in remission still flare and even do poorly in the longer term. Nonetheless, most patients should be able to achieve some level of endoscopic improvement and, ultimately, may achieve a healed bowel. That is the goal. It is defined primarily by how the bowel looks on endoscopy using one of a number of scoring systems. The one most clinicians are familiar with is the Mayo Endoscopic Sub Score, in which a score of 0 is totally normal appearance and 3 is very severe disease.

Several classes of medications are utilized in the management of ulcerative colitis, including biologics and small-molecule DMARDs (Figure 1). 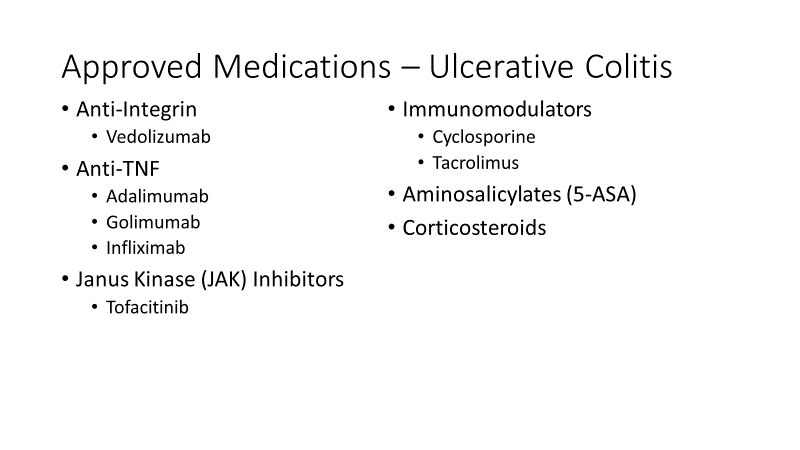 One of the current challenges is how to best sequence the various therapies. Another is even more elemental: how does one choose between one of the three anti-TNF therapies that are FDA-approved for ulcerative colitis, or the anti-integrin therapy, vedolizumab, or even tofacitinib? While in many cases the choice becomes somewhat patient-specific based on certain features of their disease such as an extraintestinal manifestation, it also is both payer-specific and the result of shared decision-making between physician and patient. Clinicians must carefully assess the different mechanisms of action of the agents within the limits of what is available and make recommendations based on the relative efficacy and safety of those therapies. Helping in this decision is the emergent strategy known as treat-to-target.

Treat-to-target is an important guiding principle in the management of ulcerative colitis. Simply defined, after selection and use of an initial therapy at some pre-defined time interval, often three to six months but certainly not longer, the patient is reassessed to ascertain if they have attained the targeted therapeutic end point; in essence, is their disease controlled, is the patient feeling well, have they obtained clinical remission, are the objective measures of their disease actually under better control, is the mucosa improved or even healed, are their laboratory values normal, and is their weight restored? If those targets are achieved, then management shifts to a monitoring strategy with a defined follow-up schedule.

If the patient has not achieved the desired target endpoints, the immediate questions are: was it a dose issue with the therapy, is it a mechanism issue requiring a completely different strategy or is it a patient issue of adherence or inability to afford their medication? Adjustments are made and the process repeats.

Validation of the treat-to-target strategy has been explored by William Sandborn, MD, in a retrospective assessment from the University of California in San Diego. Patients with ulcerative colitis who felt well but had inflammation on endoscopy underwent treatment adjustments. The usual first adjustment was to increase the dose of their existing therapy, and the second was to add a second agent. The learning point here is that treat-to-target adjustments do not need to be complicated; it is not always about making major strategy changes, such as switching medication within or between classes.

VICTORY
The U.S. VICTORY group has explored this “real world” issue with the drug agent vedolizumab.2 For the most part what has been observed is that safety data seen in the clinical trials matches what is seen in the real-world setting. While this would have been anticipated since vedolizumab is by nature a gut-selective working only on the bowel devoid of systemic immune-suppressive properties, it is nonetheless reassuring to actually have those data at hand. This is particularly relevant since a prior anti-integrin agent, natalizumab, affected the central nervous system and was associated with an increased incidence of progressive multifocal leukoencephalopathy related to an opportunistic viral infection of the brain caused by the John Cunningham virus. There is not only support for this safety outcome from VICTORY, but also from the University of Chicago and the follow-up studies mandated by FDA.

VARSITY
Earlier it was mentioned that selecting between drug agents when treating ulcerative colitis is often difficult; that’s because there are limited head-to-head comparative trials to show superiority of one over another in a specific patient population. The VARSITY trial is one such trial.3

VARSITY evaluated patients with moderate to severe ulcerative colitis and randomized them to either adalimumab at standard dosing or vedolizumab. The primary end point was clinical remission at one year. At one year, more patients had achieved clinical remission with vedolizumab than with adalimumab. VARSITY was an interesting study. For one, it suggested that vedolizumab was more effective that the comparator for this group of patients and should be considered as a first-line therapy. There remain a number of questions about this study that will hopefully be answered on publication of the full manuscript.

The take-home message is one of optimism and appreciation for the progress made in the management of ulcerative colitis. As of this point in September 2019, in the 9 years since the last ulcerative colitis guidelines were published by the ACG, new AGA guidelines are coming and great progress has been made in understanding how to predict not only patient outcomes, but also how to focus beyond the short term. Once that is successfully achieved, perhaps the natural history of ulcerative colitis can be changed.

Should biological therapies and small molecular DMARDs be utilized earlier in treating patients with ulcerative colitis?